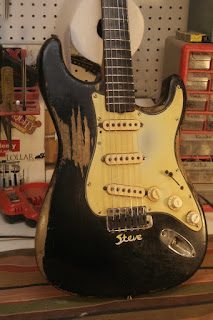 This isn't one that got away...thank goodness. But it's a guitar that I have seen and admired countless times in the hands of my personal favorite guitarist of all time, Tulsa blues legend and Oklahoma Blues Hall of Famer, Steve Pryor. I grew up in Tulsa, Oklahoma, which has a rich musical history, and I was fortunate enough to see some amazing Tulsa musicians, famous and not, over the years. There was even something called "the Tulsa sound" at one point. Steve Pryor is my all-time fave.

To me, the Tulsa sound is a mix of blues and rock and country and grit and soul and sweat. Steve Pryor embodies all of that. He was once called the heir apparent to Stevie Ray Vaughn, and I can understand the comparison. Steve can start with a slow burn and build and build until the building is on fire. He's got that gritty vocal quality that just oozes life experience and countless nights playing in bars and on smoky stages. In the early nineties, Steve started getting quite a bit of national attention. He released a more commercial album produced by Dwight Yoakam's guitarist and producer, Pete Anderson. He toured nationally, blowing the Fabulous Thunderbirds off the stage every night. But, like a lot of musicians, his career got derailed by drugs and personal issues. Eventually, in April of 2004, Steve ended up in a one-car accident that left him seriously injured and put his music career on hold throughout a long recovery. But Steve Pryor is back and, most would say, better than ever. If I still lived in Tulsa, you can count on the fact that I would be at one of his countless shows as often as I could.

I was curious about Steve's well-worn 1964 Stratocaster, so I sent a note to his Facebook page. Gretchen Mullen, who runs Steve's social media, was nice enough to respond to me and let me know that she had just written a story about Steve's famous guitar. She has been extremely kind enough to allow me to reprint it here. I will include photos from Steve's Facebook page and link up a little video for you as well. Without further ado, here is Gretchen's story of Steve Pryor's '64 Fender Stratocaster:

The Story of a Guitar: Steve Pryor and the Stratocaster 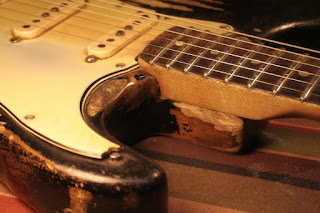 According to music legend, guitarist Chet Atkins was in a Nashville studio warming up for a session. A young technician came into the studio and stood watching open-mouthed until Chet finished.
”Gee, Mr. Atkins, that guitar sure sounds fabulous,” the tech exclaimed. Chet placed the guitar on its stand, smiled at the tech and said, “Well, son, how does it sound now?”

In 1975, Norman’s Rare Guitars opened in Reseda, California.  It was a small, word-of-mouth shop specializing in vintage instruments known among musicians as the go-to location for the finest guitars available in the United States. In 1978, Tulsa blues musician Steve Pryor walked in to Norman’s, knowing he wanted to buy an L-series black Stratocaster. The only specification he wasn’t sure about was the year. After a bit of discussion, ten black 1964 Stratocasters were brought out for Pryor to inspect. He spent his entire day there, trying each guitar with equal interest. By the end of the day, he walked out with the black Stratocaster he still plays today. It cost him $200 and a Music Man Amplifier which the store agreed to take in trade.

Since that time, Steve Pryor and his guitar have travelled many miles, played thousands of venues from nice to not so nice, and shared the stage with the likes of such blues greats as Muddy Waters, John Lee Hooker, Paul Butterfield, Bugs Henderson and The Fabulous Thunderbirds. The guitar has accompanied him to his 2006 induction into the Oklahoma Blues Hall of Fame and his 2009 induction into the Oklahoma Jazz Hall of Fame as a blues inductee. 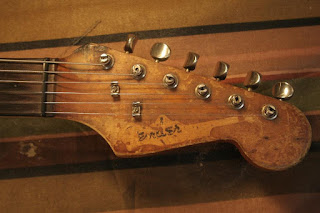 The first Fender Stratocaster appeared in 1954. The body of the Stratocaster was more sleek and contoured than any other guitar that preceded it. The guitar’s build allowed the musician to move more freely and allowed for greater showmanship on stage. Once it was embraced by rock icons such as Buddy Holly, George Harrison, Eric Clapton and Jimi Hendrix, the guitar’s popularity soared. Simply put, the Stratocaster looked “cool.”

Interestingly, this is one of the reasons, aside from sound, that Steve Pryor went into Norman’s Rare Guitars that day way back in 1978 and requested a black Strat. Pryor’s guitar needed to be black for one reason and one reason only: Jimi Hendrix’s last guitar, a 1968 Stratocaster, was black, and photographed with his black Strat, Hendrix looked very cool. 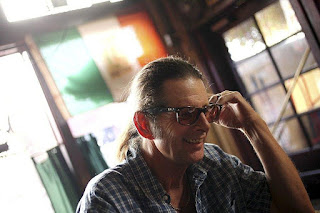 While many musicians have given their guitars nicknames—Willie Nelson and “Trigger;” B. B. King and “Lucille;” Stevie Ray Vaughan and “Number One”—Pryor’s Strat has never had a name. But this does not mean the guitar isn’t treated well. When at home and not in its case, the guitar rests high up off the floor on a soft pallet. And only once did the beloved guitar get mistreated by its owner. In a frantic and hurried restringing session, Pryor lost his temper and threw the guitar across a concrete dressing room floor. The guitar did indeed suffer an injury, which Pryor repaired himself with a vial of super glue. Fortunately, it did not change the sound.

So, has Steve Pryor been asked to sell his guitar? Absolutely. Has any offer tempted him to date? Nope. Pryor predicts his Strat will always be repairable, though he does occasionally toy with the idea of retiring it and getting a new one.

Has anyone else ever played Steve Pryor’s Stratocaster? Pryor hesitates, and has to think about that for just a moment. “Well, yes, sometimes, but only if I’m standing there. There’s no borrowing.”
So, now for the big question. Is it the guitar that makes the musician, or is it the musician that makes the guitar, or is it a combination of both? On this question, Steve Pryor does not hesitate. With complete humility, he asserts that the guitar does not make the musician. What does help is a level of familiarity with the instrument. “It is really more a matter of personal comfort,” he explains.
In other words, harkening back to 1978, Steve Pryor could have walked out with any one of those ten Stratocasters that day and the results would have been the same. Thirty four years and five albums later, thousands of live performances, and Steve Pryor would still be the guitar virtuoso that he is today. As the world renowned Andres Segovia once explained, “Lean your body forward slightly to support the guitar against your chest, for the poetry of the music should resound in your heart.” 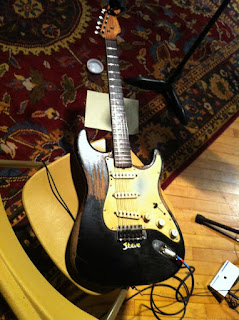 Entering the serial number printed on Steve’s guitar into a database called “The Guitar Dater Project” produces the following information: “Your guitar was made at the Fullerton Plant (Fender - Pre CBS Era), USA in the Year(s): 1964.” Leo Fender sold his company to CBS in 1965 and pre-CBS Era guitars are highly sought after by collectors.

If you place Steve’s guitar next to Strats owned by Stevie Ray Vaughan and John Mayer, the scuff marks above the pickguards on all three guitars would line-up almost exactly, reflecting similar styles of playing and hand movements.

Pryor’s black Strat, upon closer inspection, has an undercoat of Sherwood Green. Fender frequently painted its guitars with two layers, sometimes to hide flaws, and sometimes to meet customer demand for a particular color. The colors chosen for undercoats were used by Fender based on availability, and combinations of primers and finishes are inconsistent. Fender custom colors were highly influenced by the colors of the most popular automobiles of the day.

Please note: all photos were "borrowed" from Steve Pryor's Facebook page. I know the top three photos of his guitar were by Seth Lee Jones. I don't have credits for the others. My apologies.
- - -

Posted by Jaimie Muehlhausen at 12:57 AM 2 comments: