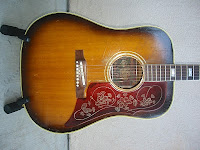 It is with GREAT sadness that I report the departure of this guitar. A lot of guitars are pretty or cool or have expensive features or parts. This guitar had SOUL. It had MOJO. I got it through eBay a couple of years ago and loved it the minute I came across it up for auction. It wasn't mint condition...nope, far from it. You could say it was beat to hell. But functionally it was perfection. It just had that certain something that you can't put a price on. It is a 1964 (or possibly '63) Epiphone Frontier dreadnought acoustic guitar. It's the one that's got the coolest pickguard in history: the rope and cactus tortoise shell pickguard. This was Graham Parson's guitar of choice and a lot of Graham disciples have to have one. That wasn't my case, but certainly is true for many. This thing has scrapes and dings and nicks and the finish is checked and then checked some more. There is play wear in places I didn't know you could play.

If it were a Fender Relic you'd be paying an extra $2000 for this kind of a relic job. But this one is real. This one is earned. 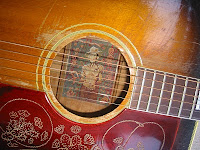 It had that sound. Magic. And as a songwriter, this guitar just seemed to have songs in it. I'd say that 9 times out of 10 when I picked up this guitar I was inspired to come up with something new or the spark of an idea for a song. From speaking to the original owner, I don't believe it was previously owned by a songwriter. I believe it did it's time playing covers in the bars and around the house. When I got it, the first thing I did was write about 4 new songs. They were just busting out of this guitar. Maybe it's the folk art portrait of Hank Williams in the soundhole...maybe it was channeling Hank. I don't know. All I can say is that I have never finally made up my mind to sell a guitar and then nearly reneged on the deal more than once. 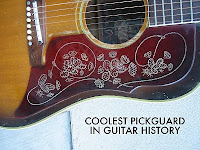 The guy who bought it turned out to be a great owner of this guitar...very respectful of the magic it contains. He owns quite a few gems already and was looking for something not like anything else out there. Yes, he came across it because he was looking for a Frontier, but he bought it because it was different...imperfect...soulful. He came by my office today and took it out of it's case and strummed a few tasteful chords. He smiled and knew it was what he was looking for. He immediately took the money out of his pocket and handed it to me, as though maybe in this last second, this one last chance to bail out, I would change my mind if he didn't get it over with. And he was right. It's a good thing the wad of hundreds was thick and my need for new transportation outweighed logic. Because if you've read everything I just wrote, there is no logic in selling this guitar.

It makes no sense. But it's done and the Frontier has a new home. A good one I think. And my faith was restored when the new owner looked at me as he was leaving and said, "If you ever change your mind and want it back, let me know. I have a lot of guitars and I understand. We'll work it out."

Man...that's too good to be true. I hope he meant it because there will come day when I will be calling him. As the guy in the Men's Warehouse commercial says, "I guarantee it."
--
Posted by Jaimie Muehlhausen at 10:11 PM 4 comments: