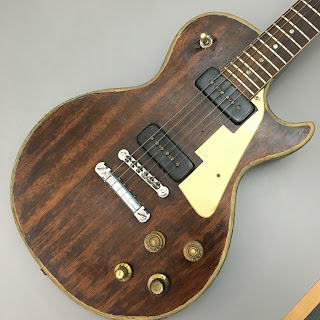 I've been lucky enough to find quite a few guitars in thrift stores, a couple that I have kept and many that I have flipped for some extra cash. This past week I was really lucky. There is one particular thrift store that I will not name for obvious reasons that is very large and has a big checkout counter at the front of the store. They keep items behind the counter that they think are more valuable, and it's sometimes funny to see what they think is valuable. It's also where they put any guitar that comes in. To check out the guitars that are for sale, you have to wait for an employee to accompany you behind the counter and stand there while you check stuff out. I noticed that there were a few acoustics behind the counter on Monday and waited patiently to get my turn to see what treasures were in the cases in front of me. I finally got my chance and opened the first case: a cheap Mexican classical guitar they wanted $79 for. Next case was a cheap Bentley acoustic for $89. The third and final case was kind of stuck behind some junk and I finally got it open and immediately started smiling. It was a 1974 Yamaha FG-160 acoustic guitar. Believe it or not, 4 years earlier at this very thrift store, I found another 1974 FG-160 in equally dirty, beat up condition. And it was one of the best guitars I've owned...still own it. So I knew I had another gem and, in true thrift store fashion, they only wanted $39 for it. The best guitar of the bunch by far and also the cheapest. 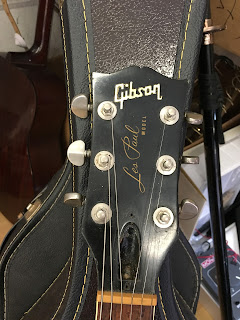 As I was checking my pockets to see if I had $40 or not, I noticed what looked like another guitar headstock peeking out of the pile. Hmmmm...what do we have here? I got a quick glance at the body and it was a mess. Too bad...a crappy junker falling apart and rightly donated to the thrift store. Wait a second....does that say Gibson Les Paul on the headstock? I think it does. Kind of grimy though. I wiped away a layer of dust and goop and sure enough...Gibson. I pulled it out and the body had been stripped down and very poorly stained. The pickup switch was hanging halfway out of a caved-in hole in the body. Three different kinds of knobs, all at different angles and turnability. Pickups were dirty but looked okay. Someone had hand-painted some fake binding around the edge of the body with what looked like must have been a well-used tooth brush. Was it even a real Les Paul? Was the logo faked? What the hell was it? Another guy was standing on the other side of the counter, curious what I was looking at. I asked him if he was a guitar guy and he said "sort of." We tried to decide what I was holding. Oh, and I should mention that they wanted $299.95 for it. So...if it really was a Les Paul, I should get it. If not, that would be a large waste of money. So you kind of want to be sure when spending that much. 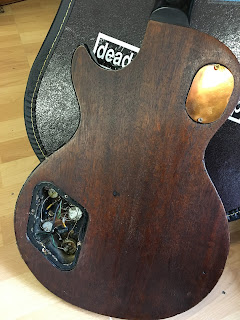 Finally I told the lady I wanted it and asked if she could hold it for long enough to run over to the bank. She said she could hold it for one hour. Cool...I had one hour to figure it out. I took a few photos of the body and both sides of the headstock, the back of which included a prominent serial number stamped into the paint. Luckily, I know the editor of The Fretboard Journal magazine, and one of my bandmates handles all of the musical instruments for a group of pawn shops. I sent them both the photos and asked them what they thought I had. Is it real? Should I get it? I was stumped. I went back and forth with each of them and we quickly determined it was a 1978 Les Paul, made in the Kalamazoo, Michigan factory. My bandmate originally thought it was a Les Paul Standard, but I later figured out that it is actually a Les Paul Special. At the end of the '70s, there was a lot of change happening at Gibson and it was not known for consistency. So it was tricky. Finally I asked them both...should I buy it? They both came back to me and said that if I didn't get it for myself, buy it for them. Okay, if the editor of Fretboard Journal wants it, it must be worth getting. A project guitar for sure...I mean it was falling apart...but a vintage Gibson Les Paul in any fixable condition is worth the time and effort for $299. 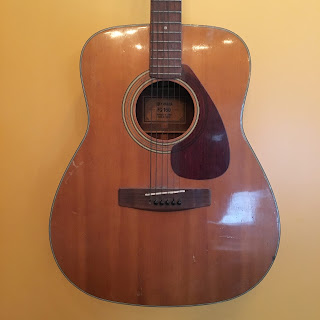 I headed out the door quickly and drove down to a branch of my bank. Got out enough money to buy both the Les Paul and the Yamaha and headed back to the store. I made it back in time and was feeling pretty good walking out the door with two cool guitars. I have plenty of acoustics and already own an FG-160, so I spent some time cleaning the Yamaha up, polishing it, putting new strings on it and getting it ready to sell. I listed it on Craigslist the next day and sold it almost immediately for $150. It was purchased by someone who was looking for a great starter guitar and I'd say he got a great one for that price. And I profited a little over $100 that I put towards the price I paid for the Les Paul. That next night I gave the Gibson a little attention and checked it out. I posted a photo of it on Instagram (@jaimiemuehlhausen if you are interested), and Ryan Adams left a comment about how awesome the pickups looked. I posted a photo of the Yamaha as well and Butch Walker left a comment about how he owns a few of the old Yamahas and how great they are. Cool! I was a little hesitant to plug the Gibson in, but I did anyway and I was amazed...it had a lot of noise, which was not surprising due to the wires hanging out and the pickup switch dangling. But it worked! It actually sounded pretty cool! It's got P-90 (or possibly P-100?) pickups in it and they are going to sound fantastic when I get this thing restored.

I made the right decision and I'm really happy about it. I'm going to slowly but surely restore this guitar and get it playing again. I may not do a 100% faithful restoration...it's just too messed up for that. But I'm going to make it look nice and play well once again. I'll post a follow-up at some point and let you know how it has gone. But I'll end this story with this little observation: people always mention how "lucky" I am to find guitars in thrift stores and other places. There is no luck involved really...it is perseverance. You go and you go and you go and you find nothing. Over and over. And then, if you stick with it, the thrift store gods smile on you and reward you with something cool like a Yamaha or a funky Japanese bass or an old Magnatone amp that only needs a fuse. Or sometimes, if you've been really good, you get a messed up old Les Paul meant just for you. I guess I've been good lately.
Posted by Jaimie Muehlhausen at 10:27 PM

Nice article to know much more on Gibson guitar and its different parts. I have got lots of vital information on guitar and very thankful for this article. Recently I am going to install the wraparound bridge for my Gibson guitar. It is an integral tailpiece unit of a guitar and responsible for major functionality of a guitar. I want to get it done by a professional one.